BRIEF OVERVIEW
In response to the brutal killing of southern Africa’s rhinos, in 2012 Noel produced a bronze conceptual sculpture titled Mapungubwe Revisited which he has sold at various high profile public events, in partnership with WWF South Africa and in support of their rhino conservation work.

As an artist he could no longer remain silent as rhino after rhino was brutally killed, but instead of the terrible sadness, his focus was rather a celebration of the rhino, with his inspiration drawn from the original sculpture found at Mapungubwe. In effect Mapungubwe Revisited speaks to two artist’s working eight hundred years apart, observing the distance between the societies in which we both live, and how in modern times, our reverence for the natural world has been greatly diminished.

Noel and Belinda Ashton’s ‘Mapungubwe Revisited’ is a brilliant initiative to honour the rhino. The reverence of the ancient people for this wonderful animal is a sharp reminder to so-called civilised man to ensure that the species survives in our modern world. (Dr Ian Player)

THE INSPIRATION BEHIND MAPUNGUBWE REVISITED
Eight hundred years ago, at the Late Iron Age archaeological site of Mapungubwe, a member of the royal family was laid to rest, and within the grave was placed a little rhino, 15cm long and made of pure gold. This compelling artwork speaks through time, and as an artist Noel saw its significance not only as a symbol of the rich cultural legacy of Africa, but, as it was not a fragment of horn or body part but a complete rhino, it thereby embodies a deeper connection with, and reverence for this magnificent animal of Africa. It could be said that this gold rhino linked these people to the land through a sacred thread of belonging.

“It speaks to me, and offers a signpost to something that we might have forgotten but fortunately not lost; for it can remind us that the natural world around us is much more than a commodity, a space or a view, it is an intrinsic part of who we are and where we have come from, and each rhino killed or tract of land destroyed is another part of ourselves lost. This little gold rhino makes visible the deep connection we have with the natural world, a connection which sustains our souls, and reminds us to tread more lightly upon the earth.

Far too easily we as a species see nature and her gifts as mere resources, available for the plunder and taking, and in the case of wildlife such as rhino, to be killed with horrific brutality. This points to a crisis, not only for rhinos, but for us as well. By enabling these acts of cruelty and disregard, we make visible a fraying of the mortality, empathy, sanctity of life and wisdom which are surely the cornerstones to our civilization…” (Noel at the launch of Mapungubwe Revisited) 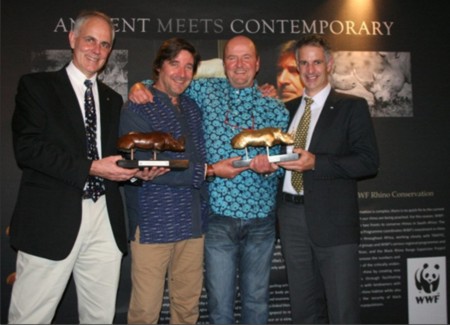 A UNIQUE INITIATIVE IN PARTNERSHIP WITH WWF SOUTH AFRICA
Through the creation of two distinctive editions, the Mapungubwe Revisited sculpture has been sold at unique selling events hosted by WWF-SA, with proceeds from the sale of each sculpture being donated to WWF-SA and its important conservation work.

FIND OUT MORE ABOUT THE INITIATIVE

SUPPORT THE INITIATIVE
If you would like to find out about purchasing a Mapungubwe Revisited bronze sculpture, please contact Dr Amy Goldblatt at AGoldblatt@wwf.org.za